Our world is becoming smaller with time, bringing us closer and bestowing upon us a number of avenues to easily showcase ourselves in any manner we want. Perhaps the biggest facilitating agent in this regard, is Online Social Media (OSM). In a way, OSM replicates our world, with friends, interactions and constant information exchange. The world of OSM seems to have developed an interesting currency of its own too – LIKES and COMMENTS, the dollars and cents of the virtual realm; something which everyone aspires to have in abundance.

We are also familiar with the popular “selfie” phenomenon. Recognized as the “word of the year” by Oxford dictionary in 2013, the “selfie” is defined as a “photograph taken of oneself, and uploaded to a social media website.”  In recent years, there has been a sharp increase in the number of selfies posted on OSM. However, one particularly disturbing trend that has emerged lately is that of clicking dangerous selfies; proving to be so disastrous that during the year 2015 alone, there have been more deaths caused due to selfies than shark attacks all over the world [1]. Figure 1 shows examples of such selfies taken moments before the fatal incident. A selfie-related death can be defined as a death of an individual or group of people that could have been avoided had the individual(s) not been taking a selfie. 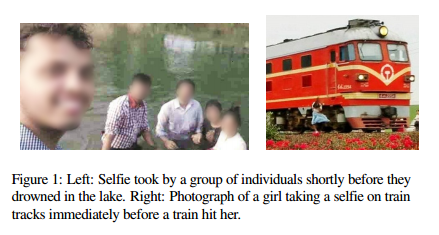 The level of threat that adventurous selfie taking behaviour exposes people to, is being acknowledged slowly by governments as well. Russian authorities came up with a public awareness campaign to enlighten citizens of the hazardous implications of taking selfies [2]. Similarly, Mumbai police recently classified 16 zones across the city as No-Selfie zones, after a rise in the number of selfie casualties [3].

The reason for this outrageous trend of dangerous selfies becomes clear when we combine the thoughts above. Since the advent of online social networks, people have developed an insatiable urge to be the most “popular” in their community. In medicinal terms, this has been long compared to forms of narcissism and in relation to selfies, termed as Selfitis [4,5,6]. This becomes the prime reason why people resort to performing risky feats while taking a selfie to garner more appreciation in the form of likes and comments from their friends online.

We, at Precog@IIITD chose to analyse the issue from a technical perspective and to dive deeper into what characterizes a selfie casualty/death, what kind of information we can extract from selfie images and how selfie casualties can be prevented.

Over the past two years, we found that a total of 127 deaths have been reported to be caused due to selfies, of which a whopping 76 deaths occurred in India alone! [7] Table 1 shows the country-wise distribution of selfie casualties across the world. The reasons for these selfie casualties were found to broadly belong to the following categories (Figure 2) at https://views.guru/: 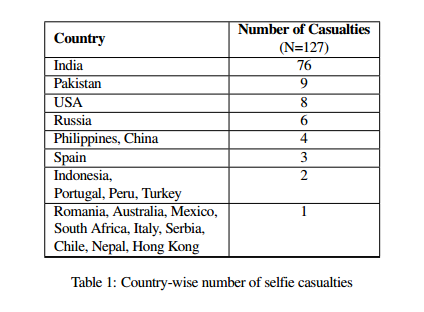 Figure 2: (a) Number of Deaths and (b) Number of Incidents due to various reasons

Using a collective dataset of 138,496 tweets collected between August and September 2016, we implemented a three-fold architecture based on Image features, Location features, and Text features to quantify the danger level of selfies in our dataset.  Our machine learning model takes into account a variety of features to identify dangerous selfies along with their potential risks, and analyses common characteristics in these images. These features are supplied to four different classifiers with similar parameters to avoid bias in the results. Table 2 shows the sets of features we used for each feature type. 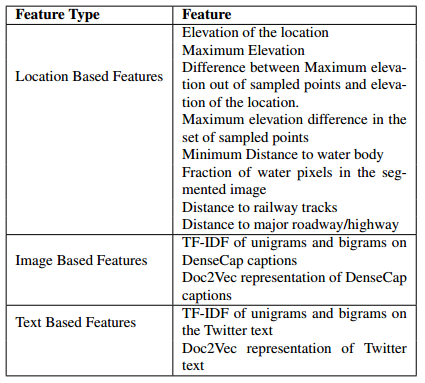 After thorough analysis, we found that the image-based features are the best indicators that accurately capture the dangerous nature of a selfie, in comparison to other feature-types. This seems logical as image features attempt to infer meaning directly out of the image, in a sense replicating our visual senses. Our model resulted in an accuracy of 73.6% for the task of identifying a dangerous selfie.

To further capture the risk type of a dangerous selfie, we used specific features that were relevant only to a particular risk type and supplied the data to our classifier. In particular, we concentrated on singling out dangerous selfies that belonged to height, water and vehicle related risks. We found that the set of features performing the best for this task was a combination of all 3 feature types – Image, Location and Text based features, and the best accuracy was obtained on the Water-related features. With remarkable accuracy, we have been able to establish a method to identify and capture the “danger level” of a selfie along with its risk type.

With the growing trend of dangerous selfies, it becomes important to spread awareness of the inherent hazards associated with people risking their lives simply for the sake of recognition on a virtual forum. As Shakespeare coins it, this type of “Bubble Reputation” induced by a dangerous selfie posted on OSM has claimed multiple lives lately. This work is a small contribution towards making the world safer, by making the people aware.

Our full report / paper on this work. You can access the portal and our dataset here.